The day after the stampede that killed 350 people, Family FM went on air with special live programs , reporting unfolding events and announcing the emergency number for relatives to call. Later, FEBC staff took gifts of food and radios to survivors in hospital. 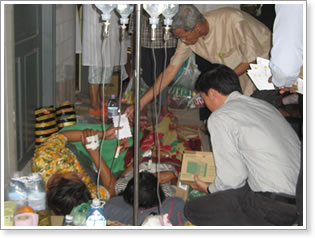 The day after the bridge stampede which left 350 dead and as many injured, FEBC’s local station Family FM was on air with special programs. We kept listeners up to date with the unfolding news, took calls from listeners in the provinces desperate for news of their loved ones, and gave out the phone numbers of hospitals and of the government emergency phone line.