"Peace in the Family" was the title of a seminar run by FEBC in partnership with the Christian mediation group Peace Bridges in Kampong Speu in September. Afterwards FEBC gave out 500 radios for distribution in the community. 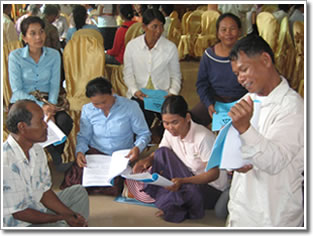 This kind of family counselling is a revelation to many people in Cambodia. Family life and loyalty was a major casualty of the Pol Pot years, and many of today’s generation have never seen an example of a happy home. Participants spoke highly of the seminar and also of Highway of Peace, the weekly program broadcast on Family FM and featuring Peace Bridges staff.

Sovy, mother of three, said that listening to the program had reduced stress in her family. “Before, if my kids didn’t listen to me I would hit them,” she said. “Now we solve our problems by talking.”

After the seminar FEBC gave out 500 radios for people to distribute in their own churches and to friends and neighbours.